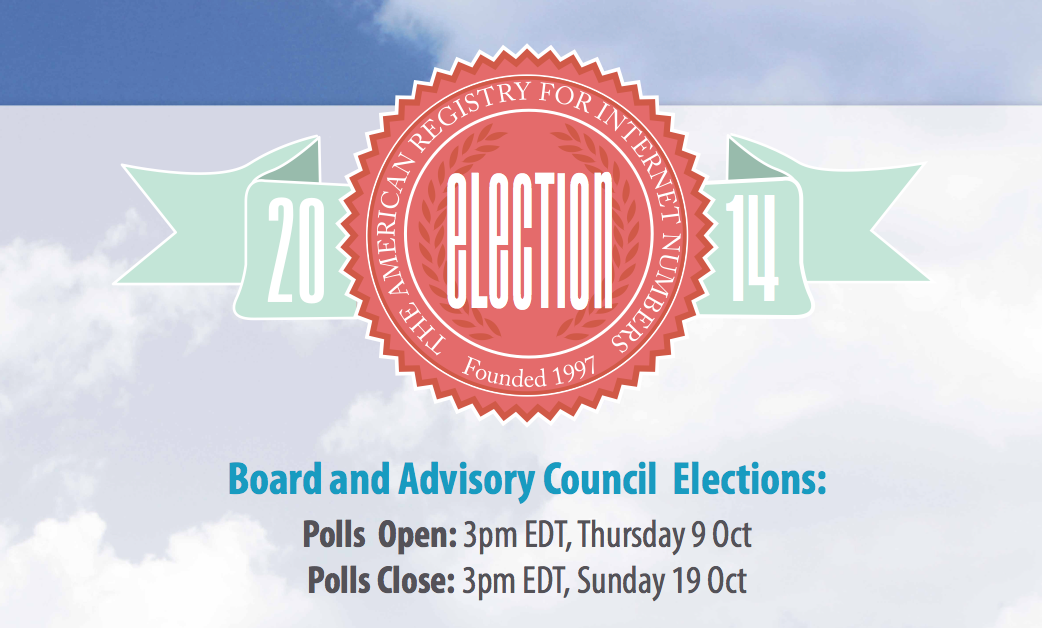 The polls are open in this year’s ARIN Board and Advisory Council elections. If you’re a designated member representative (DMR), you are the person responsible for casting a vote on behalf of your organization. Note than voter eligibility was set 60 days out from the start of the election, on 11 August 2014. The election began on 9 October 2014 and will stay open through Sunday, 19 October at 3 PM EDT. Voting in elections is the main responsibility and benefit of ARIN membership, so make sure you take advantage of this opportunity to shape ARIN leadership. Each ARIN member organization may cast one vote, so all votes count equally, and your participation is encouraged. Good voter turnout is a statistic we hope to hold up!

Meet the Candidates for the 2013 ARIN Elections

With ARIN 32 in Phoenix just around the corner, it is just about time for ARIN elections. There are three distinct elections this year—one for the Board of …

ARIN Elections: Everything You Need to Know

With our second 2012 Public Policy and Members Meeting around the corner, it is just about time for ARIN elections. As usual, there are three distinct elections …

Meet our Candidates and Make a Statement: Board and AC Need Your Support for Upcoming Elections

The ARIN 2011 election process has set sail. This October, ARIN Designated Member Representatives who are eligible to vote (check your eligibility here) will …

Having Your Say in ARIN Elections