Internet Routing Registries (IRRs) contain information — submitted and maintained by ISPs or other entities — about Autonomous System Numbers (ASNs) and routing IP number prefixes. IRRs can be used by ISPs to develop routing plans. For example, ISPs who use Border Gateway Protocol (BGP) can create Access Control Lists to permit or deny traffic in their networks based on route registry information.

The global IRR is comprised of a network of distributed databases maintained by Regional Internet Registries (RIRs) such as ARIN, service providers, and third parties. Some of these databases contain only routing information for a particular region, network, or ISP. Other IRR databases mirror specific IRR databases, and contain IRR information from multiple databases. One of the IRR maintainers provides a list of routing registries. 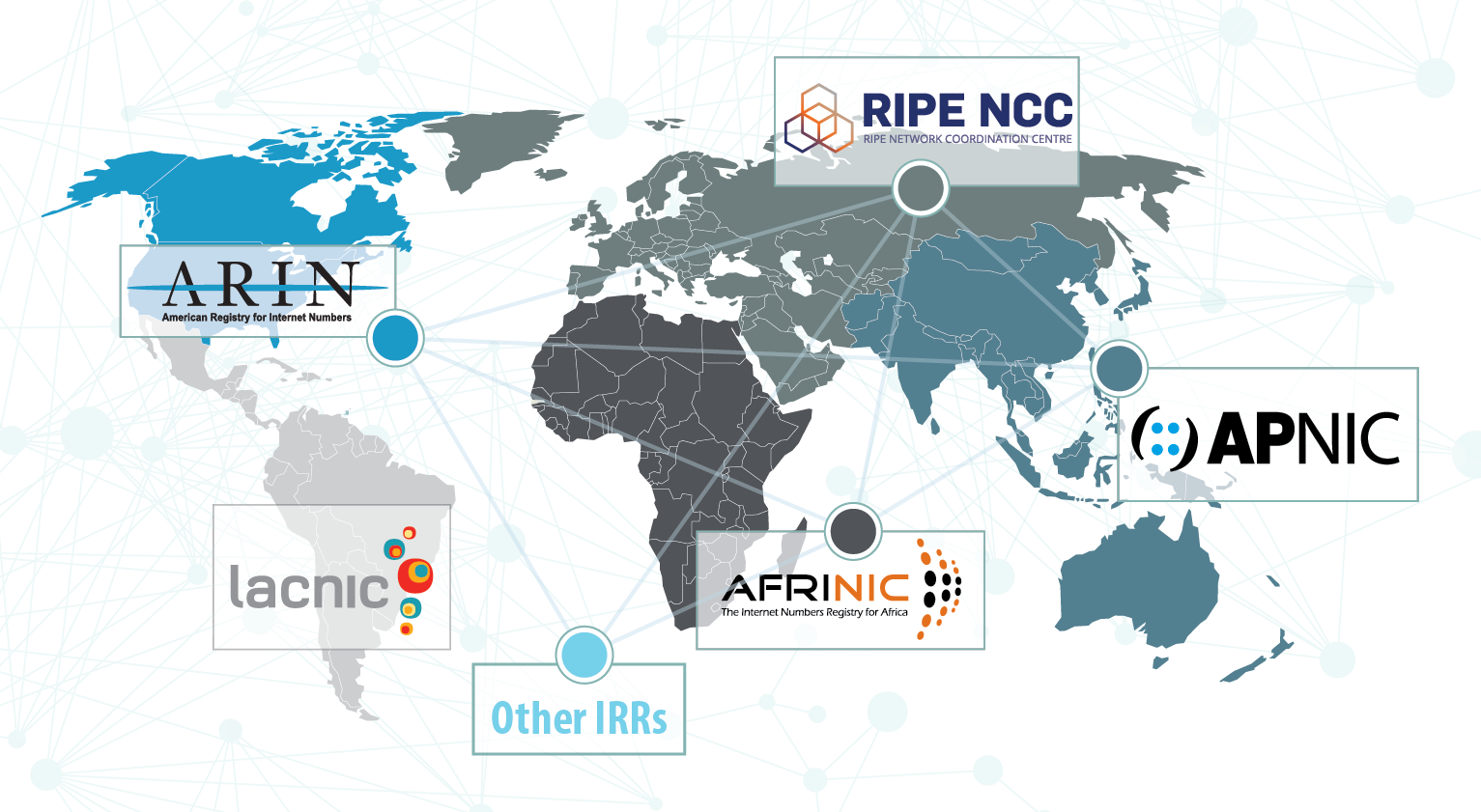 Overview of the ARIN IRR 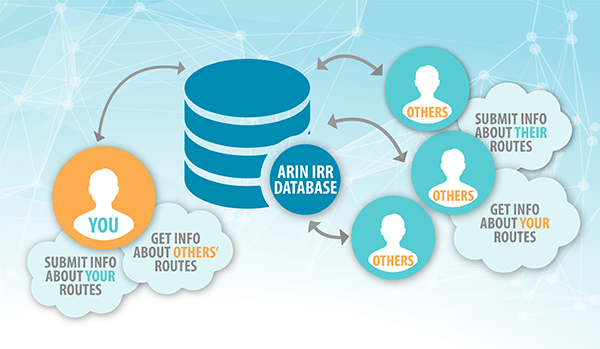 The ARIN IRR stores information in Routing Policy Specification Language (RPSL) objects. These objects are submitted to the ARIN IRR by resource holders such as ISPs and retrieved by other IRRs when ISPs in their region are requesting ARIN routing information.

ARIN’s IRR is integrated with ARIN Online. The IRR-email and IRR-online systems are both connected to ARIN’s IRR database. The database provides IRR information via a Near Real-Time Monitoring (NRTM) service and FTP, and is also accessible using Whois on port 43.

The following illustration provides an overview of the components of ARIN’s IRR. 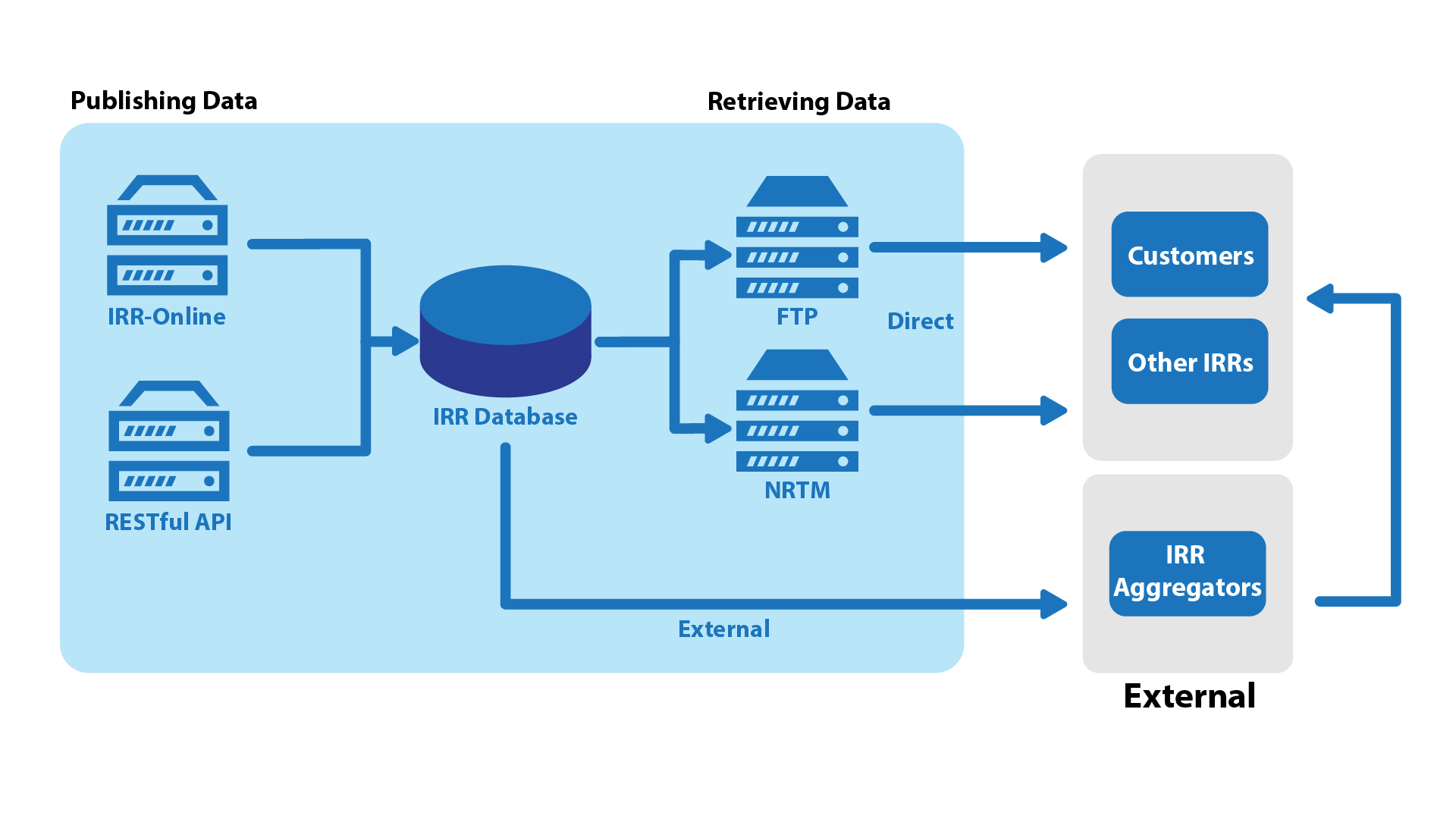 ARIN’s IRR provides multiple methods for entering IRR data. Some of the differences between IRR-online, the IRR RESTful API, and IRR-email are summarized in the following table.

More information about how to submit and retrieve IRR data is provided in the following sections.

Data can be submitted to ARIN’s IRR using the methods described in the following sections. Currently, ARIN allows you to submit data using the graphical user interface (GUI) and using the RESTful interface. (For a discussion of email templates, visit ARIN IRR-email System.)

ARIN has categorized IRR objects as simple and advanced. Simple objects are those created by:

Advanced objects are those created by:

Because ARIN is implementing IRR functionality in stages, the distinction between simple and advanced objects is important when viewing, updating, and deleting objects. It does not affect the IRR record that is retrieved from ARIN by other users, which is in RPSL format.

Currently, viewing, editing, and deleting of some objects is limited depending on the method used originally to create the object; refer to the following table. The system will return a warning if you try an operation that is not permitted–for example, using a REST command with an XML payload to view an object originally created with a REST command using RPSL (an advanced object).

* Migrated objects have been imported from email templates that have passed the newer, stricter validation requirements for IRR objects and are indicated by a note on the object page in the ARIN Online graphical user interface (GUI).

ARIN’s IRR-online is available from the main navigation menu in ARIN Online. To learn how to submit and manage routing information in IRR-online, visit the ARIN IRR-online User Guide.

ARIN provides a RESTful Application Programming Interface (API) that allows users to submit routing information via Representational State Transfer (REST) commands in scripts or software. This provides support for automating bulk data entry of route information. Visit the ARIN IRR RESTful API User Guide for more information on how to use these commands.

ARIN provides an email template-based system (IRR-email) for users to create and edit IRR records. As of 10 June 2020, this system is not accepting new users. Users of IRR-email who want to transition to using ARIN Online to manage their IRR information should visit Implementation Notes for ARIN’s Web-Based IRR.

You will need to establish two NRTM sessions to gain access to all of ARIN’s IRR objects (both ARIN and ARIN-NONAUTH).

Note: Objects created in IRR-email are migrated daily to the appropriate NRTM dataset (ARIN or ARIN-NONAUTH).

ARIN’s IRR information can be obtained from ftp://ftp.arin.net/pub/rr/. The FTP site can be used by mirrors in bootstrapping before using NRTM. The database source files can also be downloaded directly. The FTP site provides two sources: one for authorized objects and one for nonauthenticated objects.

If you are obtaining IRR information via FTP, to get all ARIN objects, you’ll need to access the two separate sources:

Note: The source files are in compressed format (.gz).

You can also use a command-line interface command in a program such as Terminal to enter query commands. The ARIN IRR uses the Internet Routing Registry Daemon (IRRd) Version 4 database server. IRRd supports two types of Whois queries: IRRd-style queries and RIPE-style queries. You cannot mix styles in a single query. Each style has different flags and arguments.

Some common IRR query examples are listed in the following table, and longer examples are provided after the table.

For a full list of querying instructions for both IRRd-style and RIPE-style queries, view IRRd: Running queries - Whois protocol reference.

For example, to search for all members of an as-set you would enter the as-set name in the command like this:

An explanation of the results is provided here:

To search for an object such as a route6 object, enter the command like this:

Tips for Calling the Help Desk