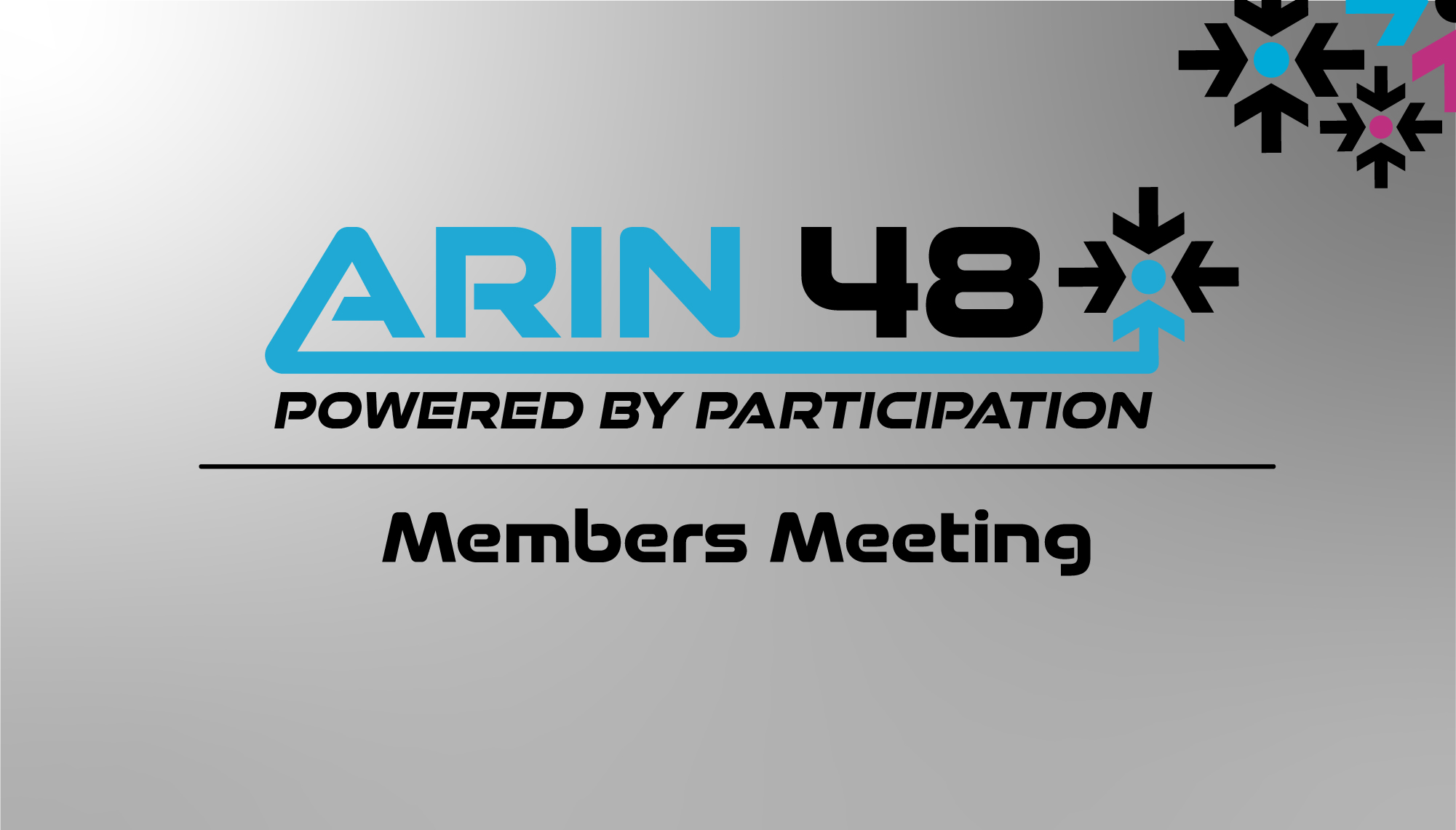 That’s a wrap on ARIN 48! We had a great mix of attendees join us live in Minneapolis, MN as well as from the comfort of their own home, and we were happy to see everyone. This was our first hybrid meeting, and we were pleased it went so smoothly. If you couldn’t make it, here’s a recap.

ARIN Director of Communications and ARIN 48 host, Hollis Kara, opened the meeting with a warm welcome, some reminders, and the agenda. Then she handed the mic over to ARIN President and CEO, John Curran, to introduce Chris Painter, President of The Global Forum on Cyber Expertise Foundation, to deliver his keynote, “Cybersecurity and the Internet: The Road Less Traveled.”

Chris Painter is a globally-recognized leader and expert on cybersecurity and cyber policy. In his most recent government role as the top cyber diplomat for the US, he coordinated and led the efforts to advance an open, secure and reliable information infrastructure. The office that he established, the Office of the Coordinator for Cyber Issues, was the first high-level position dedicated to advancing the diplomatic aspects of cyber issues.

Painter first spoke about the gap in the technical community and the policy community, saying there has always been the sense that cybersecurity has been the backburner issue. He noted that government officials and the news media talk about massive infrastructure breaches, almost like a cyber terrorist attack. But, he said, when people keep hearing about it, it desensitizes the message, and although we may not have had an apocalyptic cyberattack, the security breaches that have happened have had serious effects, such as theft of personal information, disruptive events, ransomware, and botnet attacks. “We’ve had about 80 different wake-up calls over the years,” he said. “Every major cyber event has been a wake-up call.”

Chris Painter then took questions both from virtual and in-person attendees to conclude his presentation.

John Curran then introduced ARIN Senior Director, Trust and Public Safety, Leslie Nobile, to moderate our panel. Leslie Nobile introduced the panel of experts, representing both private and public sector perspectives, to discuss some of the ways their organizations are devising and implementing strategies to deal with the ever-involving issues surrounding cybersecurity.

Chris Elverson, Supervisory Special Agent, FBI spoke about how partnerships have changed the game on cybersecurity, because collaboration helps catch cyber criminals more effectively. For example, the FBI developed an initiative that can alert the public when their password has been involved in a data breach.

Dick Leaning, Director of Trust & Safety, Cloudflare discussed how communications during the pandemic could be more secure. For example, he noted that many law enforcement agencies did not want to meet over insecure video conferencing connections. Cloudflare provided a more secure connection and infrastructure for companies and organizations, as well as collaborated with law enforcement on some of their investigations.

Niel Harper, Advisor for the UN Office for Project Services described many of the challenges UNOPS faced in transitioning their workforce to a remote environment while still maintaining a security posture and building resilient and robust online systems. With 1500 projects in 120 countries and a staff of 10,000, that’s no easy lift!

Doug Montgomery, Manager of Internet Technology Research for the National Institute of Standards and Technology wrapped up this series of presentations talking about how Internet of Things (IoT) devices present technological challenges, and there’s a greater recognition of vulnerabilities in both the service and supply chains — for example, automation, AI and machine learning systems. He also briefly spoke about the US government’s transition to IPv6, specifically to help remove the technical and economic barriers to innovation to enable Internet growth.

Leslie Nobile thanked the panelists before moving into a Q&A session, taking multiple questions from both virtual and in-person attendees.

Hollis Kara then introduced ARIN Chief Operating Officer, Richard Jimmerson, to provide an update of ARIN Operations. Jimmerson talked about some of our highlights since ARIN 47, including continued enhancements to ARIN Online and our routing-related services, as well as how demand for our registry services continues to grow. Speaking of cybersecurity, Jimmerson also discussed a new hire to our senior leadership team, a Vice President of Information Security. And of course, he mentioned our next upcoming ARIN 49 meeting, scheduled to be held in Nashville in April 2022.

Before lunch, John Curran headed back to the microphone to highlight some of our departing Board and Advisory Council (AC) members, including Gary Giesen (AC), Louie Lee (Number Resource Organization Number Council) — who John said, “literally has defined the ASO AC.”

We can’t forget, of course, Board Chair, Paul Andersen, who has served on both the AC and the Board of Trustees (serving the last 5 years as Chair). John Curran stated that Paul has “brought the voice of the members to the organization” before presenting him with a commemorative gift for his many years of service. And with that, we broke for lunch.

After our boxed lunches — with some particularly delicious Rice Krispie Treats — John Curran discussed fee harmonization, scheduled to start in 2022. He specifically said that nearly half of end users will be paying the same fee they do now, 30 percent will pay more, and 21 percent will pay less. You can find more information on the 2022 fee schedule page. John Curran then took multiple questions from the audience on the fee harmonization.

Then Paul Andersen reviewed the status of the latest consultation on the ARIN Membership Structure, explaining how the change to a single fee schedule in 2022 for end user and ISP organizations creates the opportunity to open up participation in ARIN governance to end user organizations that were previously unable to vote in ARIN elections. Note that you can participate in this consultation until 29 November. Paul Andersen then took multiple questions and comments from the in-person and virtual audience.

We had a few more updates before we moved on to Open Microphone. Next up was Leif Sawyer, Advisory Council Chair, to give a report on the AC, including an update on the three Working Groups that were formed in January 2020 (PDP, NRPM, Policy Experience Report). Then Nancy Carter, Board Treasurer, delivered the ARIN Financial Report, explaining the financial position of ARIN. Brian Kirk, ARIN Chief Financial Officer, also joined to help answer questions from attendees. Finally, Board Chair, Paul Andersen, came on stage to deliver a Board of Trustees report and began his speech with the plea to the audience to vote in this year’s ARIN Elections. Since he is stepping down at the end of this year, Paul Andersen then reflected on his time serving the ARIN community and expressed to “everyone who has heard the sound of my voice over the years, I thank you.”

Before concluding his final ARIN meeting, Andersen moderated one last open microphone, and began to take multiple points of feedback, questions and comments from the audience on a variety of topics.

John Curran then officially closed ARIN 48 and thanked our network sponsors, USI and Lumen, for their support. And of course, he urged everyone to vote in this year’s ARIN Elections now that polls are officially open.

You can read a recap from Day 1, Day 2, and Day 3 of the meeting as well as reference the slides, transcripts, and webcasts from throughout the meeting as they are posted on the Meeting Materials and Report page. 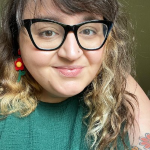