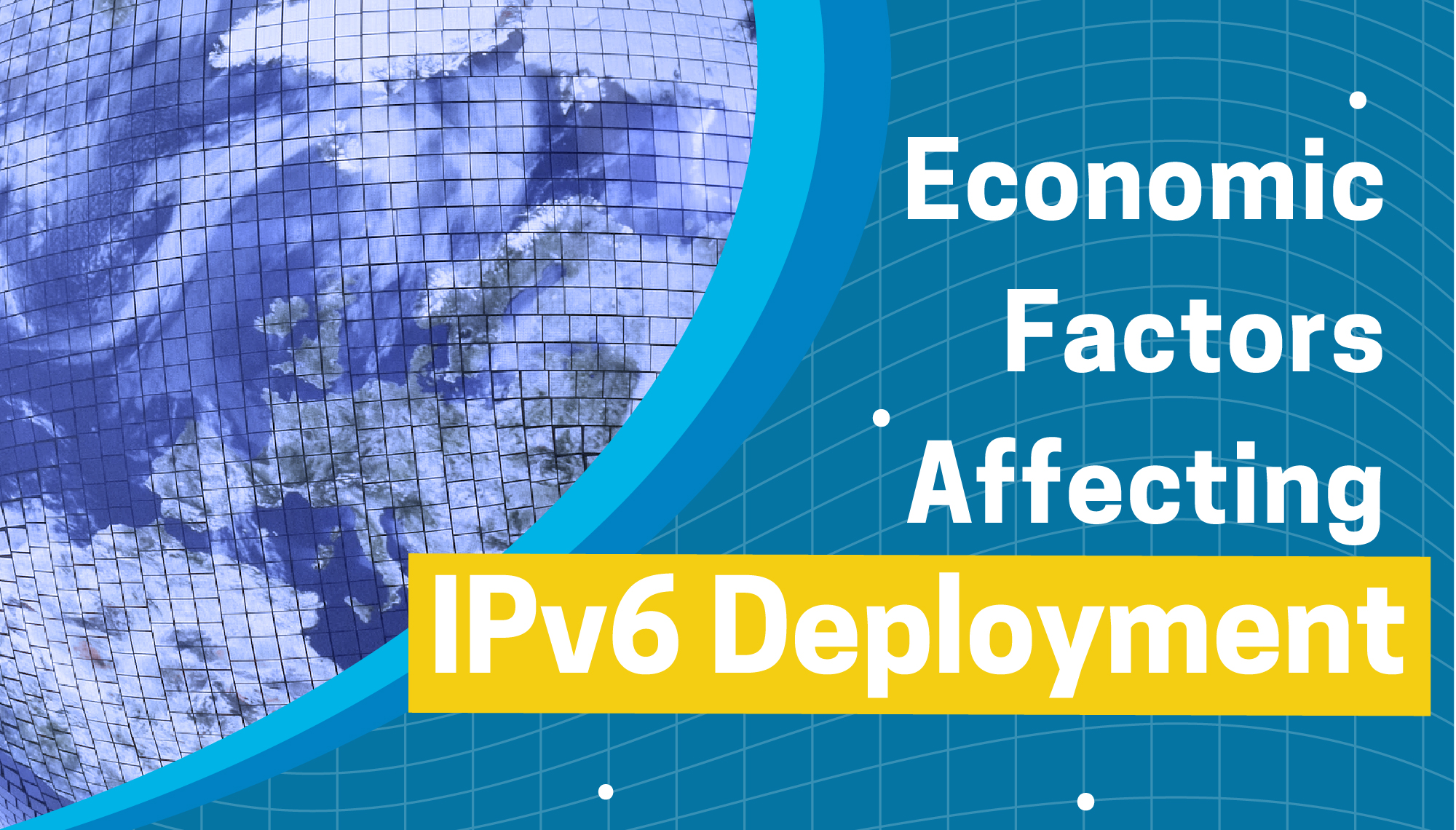 Despite more than a decade of evangelism on behalf of IPv6, the Internet community has not yet succeeded in moving the world to a new networking standard. Technologies like NAT and secondary markets for IPv4 numbers have introduced major economic efficiencies that have extended the life of IPv4. Along with the absence of backward compatibility, it’s not really correct to call the IPv4-IPv6 transition a migration; rather, it’s a standards competition. And we need to understand better the dynamics of that competition, and its implications for the future of the Internet.

Given this problem, Milton Mueller and I did a study on economic factors affecting IPv6 deployment, research sponsored by ICANN’s Office of the Chief Technology Officer. We wanted to research:

View the slides I presented of our research at ARIN 43 and a copy of the full study available on the Internet Governance Project website.

There is extensive economics literature on network migration that shows when strong network externalities are present, timing is everything. Adoption decisions are path-dependent and converge on a common protocol. Decisions are not reversible as it creates a lot of inertia and lock-in. When IPv6 was first developed, there was really no motivation to adopt it, so IPv4 spread like wildfire during the early years. Widespread compatibility across the entire market raises the cost of switching to a new standard that is not compatible with the old one. The proposed dual stack migration model envisioned by IPv6 designers had two fatal problems:

Some people have said that there’s a last mover advantage because of these problems, but I’d say that’s too pessimistic. A last mover advantage would equilibrate on everyone remaining on IPv4, but fortunately for the transition, that’s not a correct view. As a factual matter, there are first movers and numerous early movers. On the other hand, those decisions seem to be independent, uncoordinated, and almost randomly distributed across Autonomous System (AS) operators.

The economics of network migration

IPv4 address space exhaustion is a constraint on an operator’s growth. The growth in the IPv4 Internet requires the purchase of increasingly expensive IPv4 number allocations in the market, and ever more intensive sharing of globally routed IPv4 numbers. In contrast, IPv6 numbers are abundant and inexpensive and deployment opens the door to less constrained growth. IPv6 deployment does, however, incur significant initial and ongoing costs that are caused by the necessity of maintaining compatibility with IPv4. Because of the need to maintain backwards compatibility, IPv6 deployment does not immediately eliminate an operator’s need for IPv4 addresses, nor does it eliminate the need to share those addresses. The key driver of the deployment game is an operator’s objective assessment of network growth to the business and relative cost of that growth plan that involves either an IPv6 deployment or one that does not.

For a network that does decide to deploy IPv6, GC6 is a function of:

For a network that does not deploy IPv6, GC4 is a function of:

The well-known APNIC IPv6 measurement system calculates, for each economy and autonomous system, a percentage of user populations that have the capability to use IPv6 or prefer IPv6 connections. In the aggregate view, the data does not really indicate that IPv6 is being ignored, but it also does not indicate that a technology is following a normal diffusion curve. In many respects, aggregation of all the world’s networks into one graph or trend line is pretty misleading. For instance, when you drill down to the regional level you see cases where more economically developed regions have higher adoption. In 2018, the Americas had stood at about 29%. In Africa at about 1%. There’s even variance between economically developed regions. For instance, for the same time period Europe was at about 15% North America at 50%, Asia at about 17%, and Oceania at about 15%. To better understand adoption, we collected the average IPv6 capability measurements from APNIC from 215 economies across a similar 120 day period in 2015-2017, and we validated that data against Akamai’s IPv6 measurement data. We found it to be strongly correlated.

We looked at 90-day smoothed averages, identifying economies with over 5% measured IPv6-capability in any one of three years of the study. This figure categorizes our observations by growth trends. The vast majority of economies (about 80%) had no appreciable deployment. That is, they remained at or below 5%. The next largest group were economies with increasing levels of IPv6 capability, about 12% of the countries located around the world. The next largest group, at about 8%, exhibited plateaus in deployment with IPv6 capability stopping at levels anywhere between nine and 60%. That group included numerous mature European economies as well as countries in other regions, e.g., Australia, Canada, Vietnam, Ecuador, and Peru. The most accurate picture of IPv6 deployment comes from looking at adoption levels of individual ASes operating in the same market in a disaggregated basis.

We next developed an economy-level dataset covering the 2015 to 2017 period looking at macro-social factors in IPv6 adoption.  We found higher levels of IPv6-capability are correlated with greater country level GDP per capita, because IPv6 is costly. Network operators with greater wealth are more likely to spend money on it. We also found higher country-level-IPv6-capability rates were correlated with lower levels of concentration in wireless and broadband markets. This is not as straightforward to interpret, but it does seem intuitive. A market with more players increases the likelihood that one of the firms will make a random decision to deploy IPv6.

In a less concentrated market, it’s also more likely to permit new firms with no legacy infrastructure for whom the cost of IPv6 deployment is not much different than the cost of an IPv4 deployment, so supply of IPv4 numbers plays a great role in the IPv4/IPv6 standards competition. The prospect of what some engineers called “IPv4 runout” was one of the reasons for developing the IPv6 standard in the first place. From an economic point of view, however, those resources don’t just run out, instead, as the supply diminishes they become increasingly expensive and consumption patterns adapt to the scarcity with greater conservation and new forms of substitution. Network operators have adapted to this tighter supply in two ways: one, by using NAT, and two, adaptations to the secondary market. Now, the incentives provided by the secondary market have led to the identification of millions of unused and underutilized IPv4 numbers by brokers and exchanges, and we see evidence of the adaptation in the IPv4 market data.

Reviewing the limited publicly available data that’s out there for pricing, we see the median price per address has doubled in four years from around eight dollars in 2014 to 17 dollars in 2018. We corroborated these price trends in interviews with address brokers. We speculate that the total addresses transferred per year corresponds to the steady rise of prices and possibly indicates that supplies of untapped IPv4 numbers blocks are no longer expanding.

So, who is buying these resources? The answer is cloud service providers (CSPs) who represent a rapidly growing market. Interviews revealed that cloud networks represent some of the largest networks ever connected to the Internet in terms of the numbers of customers in interconnected hosts. Enterprise use of them has grown tremendously over the last few years. CSPs are buying IPv4 numbers because enterprise networks are lagging behind in IPv6 deployment relative to the public provider networks. One interviewee said only about 5-7% of network traffic is IPv6 enabled, an assertion corroborated by National Institute of Standards and Technology (NIST) industry IPv6 deployment estimates. Enterprises are slower to upgrade applications, particularly if they have current revenue from them. This drives demand for IPv4 addresses amongst the cloud providers as each service that they’re providing to these customers may require a globally routed IPv4 address.

I refer you to the full presentation from ARIN 43 to look at the different scenarios we modeled: IPv4 requirements for different types of operators, subscriber growth, and IPv6 traffic ratio growth under dual-stack or translation approaches.

The Good and Bad News

In conclusion, there’s good news and bad news in our findings for IPv6. The good news is that IPv6 is unlikely to be what’s called a “standards orphan.” For network operators that need to grow, particularly mobile networks where the software and hardware ecosystems are mostly converted, IPv6 deployment can make economic sense. It mitigates major constraints on growth and can provide a path outside of the complexities and costs of large-scale NAT. Our modeling of the dual-stack and translation shows that for fast growing networks, IPv6 deployment contains, but not immediately eliminates, the requirements for more of IPv4 number resources. The key variable is how quickly that traffic ratio shifts towards IPv6, and the rising price of IPv4 numbers provides additional stimulus to deploy. The bad news is that the need for deployers to maintain backwards compatibility with non-deployers eliminates many of the network efforts that would create pressure to convert to IPv6. Additionally, many enterprise networks don’t need to grow that much and/or maybe are still lodged in slower moving hardware and software systems tied to IPv4.

Another issue that emerged from our modeling exercise was that once the IPv6-only traffic ratio among IPv6 deployers reaches a certain level, their IPv4 address requirements start to decline. In theory, these operators could release IPv4 addresses into the market and that would alleviate the shortages and facilitate continued low levels of growth for legacy IPv4 networks. Given this complexity, the number of independent actors, and the different scenarios that they’re facing, it’s hard to posit scenarios that lead to global convergence on IPv6 in 20 years. It makes sense to consider the implications of what a mixed world means, including the architectural, economic, and policy implications.

Dr. Brenden Kuerbis is a Postdoctoral Fellow at the Georgia Institute of Technology, School of Public Policy, and a partner in the Internet Governance Project, a leading source for analysis and research on global Internet governance. He is a former Fellow in Internet Security Governance at the Citizen Lab, Munk School of Global Affairs, University of Toronto. His research focuses generally on the political economy of Internet identifiers (e.g., domain names, IP addresses) and the intersection of nation-state cybersecurity concerns with forms of Internet governance.