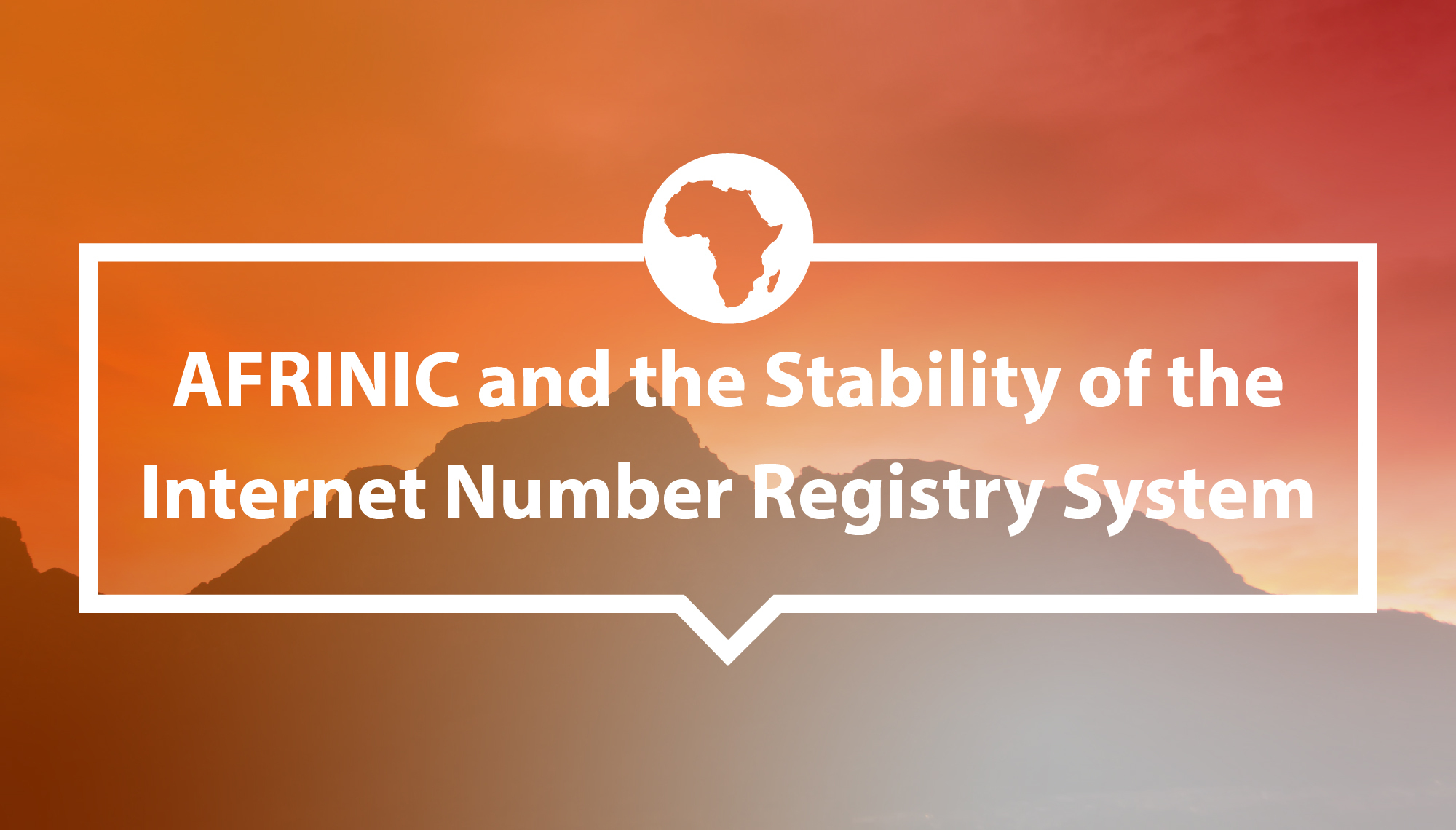 AFRINIC and the Stability of the Internet Number Registry System

As many in the community are aware, the Regional Internet Registry (RIR) that serves Africa (AFRINIC) has been involved in litigation with a company known as “Cloud Innovation” operating out of the Seychelles and under control of an individual named Lu Heng (who resides primarily in Hong Kong.) Disputes between RIRs and their customers do occur from time to time, and it is best that such disputes are resolved within that RIR, its community, and/or the applicable legal and courts system if necessary.

ARIN does not normally comment on disputes or related litigation occurring at another RIR, but this matter has become quite different, as it is both highly public and has potential for significant impact to the overall stability of the Internet number registry system and thus to ARIN and its community. Therefore, I address the ARIN community to provide insight into the nature of the dispute, to highlight some troublesome aspects of the ongoing litigation, and finally to reiterate ARIN’s unwavering support to AFRINIC and the African networking community.

The Dispute and Litigation

In 2020, AFRINIC completed a registry audit to confirm that number resources were properly reflected in the registry; and as a result, determined that it required additional information from Cloud Innovation regarding its utilization of previously issued Internet number resources. This sort of resource review is not uncommon among the RIRs, and ARIN has its own resource review process that is similar in nature. Upon reviewing the information provided by Cloud Innovation, AFRINIC determined that the resources were not being utilized for the purposes for which they were issued and noted that they would be revoked (after a suitable time to allow customer migration off those resources.) Mr. Lu and his businesses disputed AFRINIC’s authority to enforce this provision of its customer agreement and instead engaged in several legal actions in the courts in Mauritius to prevent having to return the address blocks to AFRINIC.

As noted earlier, normally disputes are routine in nature and are generally best resolved by the individual RIR, its community, and/or the applicable legal & courts system. However, among the motions that Cloud Innovation has made is one that currently freezes AFRINIC’s accounts and thus has the potential to hamper AFRINIC’s operations and ability to serve both the community in Africa as well as the global community that relies upon the Internet number registry system.  ARIN takes stability of the Internet number registry system very seriously; and considering this risk, we are compelled to provide this update to the ARIN community as it needs to be aware of these developments and potential implications. I must also share some of ARIN’s knowledge related to this matter as it informs and directs our stance going forward.

Prior Dealings with ARIN

ARIN has first-hand experience and insight into Mr. Lu’s business practices in seeking IP number resources. Mr. Lu, through Cloud Innovation, Ltd., received 6.2 million IPv4 addresses from AFRINIC in four different installments1; however, it is worth noting that in 2013,Mr. Lu, through his company Outside Heaven, Ltd., also approached and sought over one million IPv4 addresses from ARIN. ARIN ultimately refused to provide any resources to him and his business for two main reasons: First, during the review of his application to justify the provision of Internet number resources, Mr. Lu refused to provide ARIN with information that was repeatedly requested on a number of occasions; and second, the information provided by Mr. Lu was misleading and inconsistent.  In addition, Mr. Lu had no meaningful business establishment in the ARIN region; and based on his own representations, it was clear the intended use of the IPv4 addresses—if they were issued—was for business activities outside the ARIN service region.  Given the seriousness of potentially false statements made to ARIN to obtain number resources, ARIN attempted to engage in appropriate due diligence with which Mr. Lu was unwilling to cooperate.  ARIN refused his application for IPv4 number resources.

Use of the AFRINIC Resources Out of Africa

ARIN has reviewed the utilization of the number resource blocks issued by AFRINIC to Cloud Innovation and determined that the overwhelming majority of the approximately 6.2 million IP addresses issued have not been used within the African continent. While there are cases of entire address blocks being routed from an ISP in South Africa, Cloud Innovation also has announced more specific routes from ISPs in Hong Kong and the United States. Because more specific announcements take routing precedence, this rendered the routing announcement at the South African ISP moot and resulted in the vast majority of the traffic usage being outside of Africa. Such a result is not surprising as Cloud Innovation has indicated that they predominantly “lease” the IP address space to other parties rather than utilize it to provide connectivity services directly.

It is apparent that Cloud Innovation’s use of the issued number resources is not being used for the purpose for which they were issued; and as such, it appears that AFRINIC is within its rights per the registration services agreement to reclaim them so that they may be used for the benefit of the African community.  This is among the issues that will need to be considered by the Mauritian court, as well as whether there was fraud in the inception of the contractual process when the resources were issued. Because AFRINIC is directly involved in the litigation, it has quite properly limited its public comments on the ongoing litigation with Mr. Lu and his companies. However, Mr. Lu, and parties related to Mr. Lu, have not limited their actions to the courts and have maintained a steady stream of confusing and inconsistent misinformation to the public that apparently distorts the issues to cast AFRINIC in a most unfavorable light. Neither the AFRINIC nor the ARIN communities should expect a quick answer from the courts, but it will ultimately yield a ruling. In the interim, as procedural motions are being sorted out, the community should not make judgements about the court proceeding until the substantive issues are addressed.

The RIRs have committed to mutual assistance, in kind and financial, to ensure operational continuity of the Internet number registry system; and in 2015, the RIRs established a Joint RIR Stability Fund as a prudent contingency measure towards long-term Internet number registry stability. The Fund has been established through voluntary pledges of funds from individual RIRs’ reserves, and upon an RIR’s duly submitted request for support from the Stability Fund, the funds may be made available to support that RIR’s registry and policy development activities. There is in excess of $2M USD of financial support collectively pledged from the RIRs for this purpose; and in addition, support can also be provided in-kind (e.g., through operational staff for support of operational activities if needed.)

If AFRINIC requests support in accordance with the Joint RIR Stability Fund, ARIN will support such a request.  Furthermore, and without reservation, ARIN stands by its unwavering commitment to support AFRINIC and will take any and all measures necessary to ensure that neither the African networking community, nor the global Internet number registry system, is operationally impacted during this period. AFRINIC was formed (and has accomplished so much) for the benefit of the African networking community and ARIN stands with the community in dealing with those who seek to disrupt or exploit it for their own benefit.