As the President & Chair of the San Francisco-Bay Area Internet Society Chapter (SF-Bay ISOC), which has been an At-Large Structure (ALS) since 2012, I’ve recently become more involved with ICANN, and with the work of At-Large and North American Regional At-Large Organization (NARALO).

In 2015, NARALO signed an MoU with ARIN, the American Registry for Internet Numbers, to support capacity-building activities and other joint outreach activities related to Internet number resource policy development. As part of this MoU, ARIN co-located the NARALO General Assembly (GA) during the ARIN 39 Meeting in New Orleans, LA, in April 2017. Luckily for me, I had applied for an ARIN Meeting Fellowship and was selected to participate, so I was able to attend the full ARIN Meeting, participate in a few sessions of the GA, meet with key ICANN and ARIN staff as well as get to know my fellow NARALO colleagues in person. This turned out to be a fantastic opportunity for me, and one that has helped me increase my participation in both At-Large and the ARIN community.

One of the key things the MoU hopes to achieve is to introduce Internet number resource policy development to a wider set of people and make more people aware of the importance of getting involved. This was certainly the case at ARIN 39, where a proposed change, ARIN-2017-2: Removal of Community Networks, would see special provisions for community networks removed from ARIN’s Number Resource Policy Manual (NRPM). The proposers of this change had suggested removing these provisions because they hadn’t been used since they were implemented in 2010.

Several community network operators, who were present because they are NARALO ALSes and were attending the NARALO GA, stated they didn’t even know that they could get address space from ARIN, let alone that there was actually a clause in place that makes it easier for them to do so. The resulting discussion centered on the current definition of community networks in the NRPM, with several NARALO representatives as well as other community members stating that the requirement that such networks be run on a 100% volunteer basis is unrealistic.

Because of their input, the proposed change to the NRPM was not accepted and the community is now discussing how to improve the definition of community networks so that access to Internet number resources for these operators will be easier – not harder – in the future. This is a great example of how the co-located event brought in new voices at a critical time. Discussion is on going on the Public Policy Mailing List (PPML) if you would like to get involved.

Running parallel to the ARIN 39 Meeting, the NARALO GA brought together ALSes from across the region to discuss ICANN policy development, capacity building, cross-ALS communication, how to better represent the best interests of end-users and how to increase participation in At-Large. While my main focus was the ARIN 39 Meeting, I was still able to take part in a few GA activities when my schedule allowed. New ICANN CEO Göran Marby showed his support and appreciation of the NARALO At-Large community’s work by addressing the GA, meeting informally with the GA attendees at the GA reception and updating the representatives on his plans and strategy for the coming year.

ARIN CEO John Curran led a breakfast session, outlining the work of ARIN and explaining the various ways in which the ALSes could get involved in the community and policy development process. ICANN Ombudsman Herb Waye also led a breakfast session where he talked about expected standards of behavior at ICANN. A comprehensive GA report was created and can be found here.

Although I am not a newcomer to the Regional Internet Registry (RIR) world and have been involved with Internet number resources and policy development in other regions, I am new to the ARIN community. The ARIN Fellowship really helped me to get settled in, find out who to talk to about various issues and learn more about the specifics of ARIN’s policy development process and the issues that the community is currently dealing with.

ARIN 40 will be held in San Jose, CA, on October 5-6*. I highly encourage anyone with an interest in networks and number resources to apply and take advantage of this great opportunity to bring new faces, voices and perspectives to the community. ARIN provides travel and accommodation and matches Fellows with mentors who will guide and coach them through their first ARIN meeting.

The SF-Bay Area Internet Society Chapter will be at ARIN 40 in force as the event takes place in the heart of our region: we look forward to seeing you all there.

*Note: ARIN 42 will be held in Vancouver, BC 4-5 October 2018 and we are currently accepting fellowship applications for it. 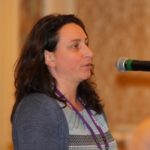 Susannah Gray is an independent strategic communications consultant, content creator and project coordinator with a background in Internet governance and multi-stakeholder, community-driven communication and PR. She currently serves as the President & Chair of the San Francisco-Bay Area ISOC Chapter and represents the Chapter within NARLAO/At-Large.