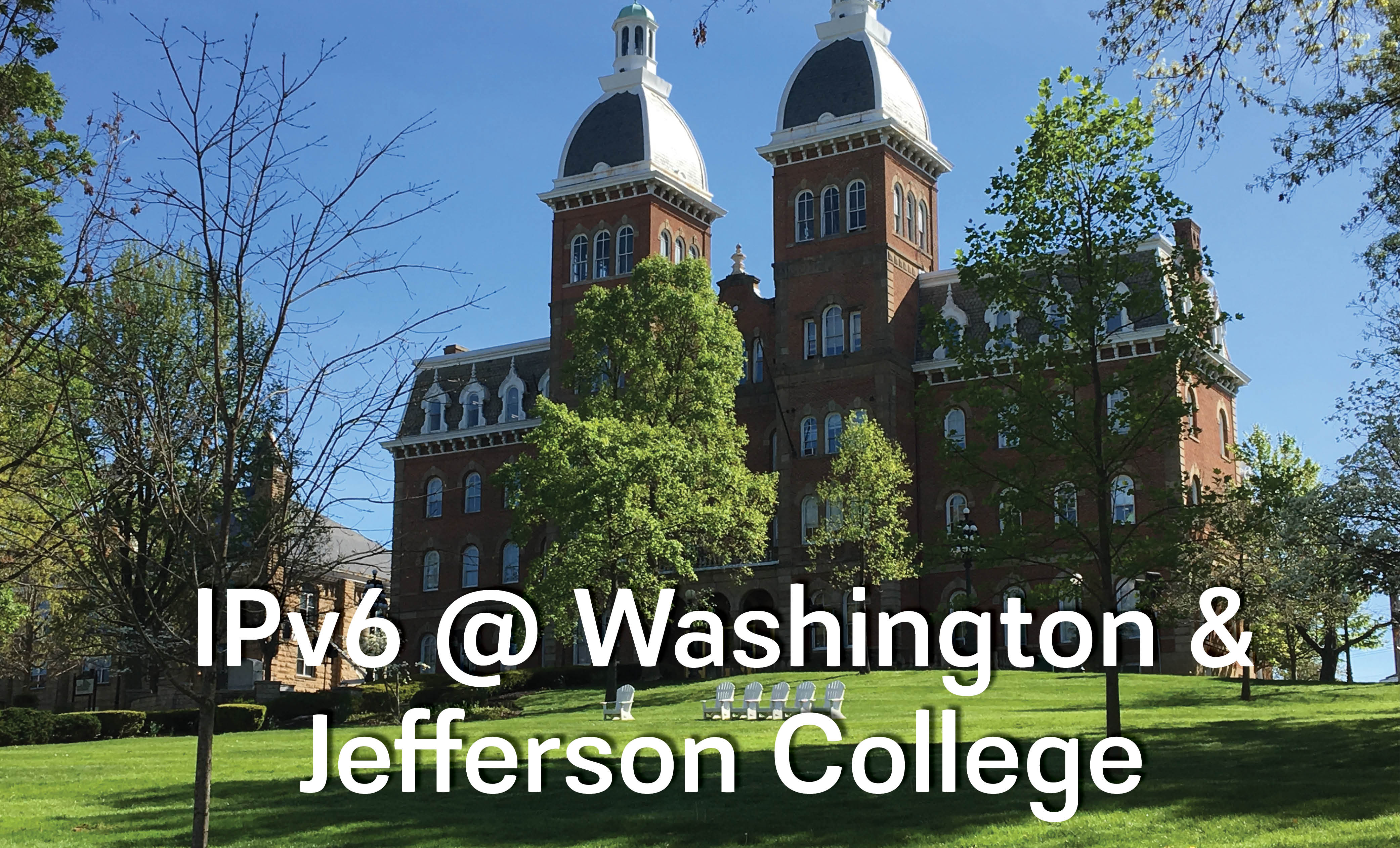 Washington and Jefferson College is ready for IPv6.  When we first started to look into doing IPv6, our initial thinking was that we could get a range of addresses, and then take our time with the rollout.  However, once we got our ARIN assignment, we took off with it. We knew more and more systems are going to be IPv4 and IPv6, so we wanted to be able to access all the resources in the world, and we wanted people to be able to access all of our resources too. We did not want to be in a situation where we were limiting ourselves.

Brace yourself for impact (or not)

In the past when I have gone to conferences and heard people talking about IPv6, they would paint this picture that IPv6 is very complicated so brace yourself for impact. Then after we got our addresses, I thought to myself, this is not as complicated as I thought it was going to be. Once I got the proper materials, started researching and planning, it was not a nightmare like people had made it out to be.  Some resources that we used to get up to speed were online tech documents, message boards, and books like Cisco IPv6 Fundamentals or Cisco IPv6 for Enterprise Networks. Fear of the unknown has led some to ignore IPv6, but really, we are running out of excuses.

Washington and Jefferson College acquired IPv6 from ARIN in 2013. Later that year, we started an in-depth planning stage. In early 2014, we enabled and configured IPv6 in our network core and on our critical servers like domain controllers, LDAP servers, DNS servers, etc.  Then as the year went on, we did more testing.  We decided to go with Stateful DHCPv6 for clients, so once we had everything set up on our servers and in our network core, we configured a test VLAN with just IPv6 to see if we could get internal communication to work.  Once we could do that with IPv6, we set up an admin VLAN for our department that was dual stack to test if we were communicating with different servers over IPv4 and IPv6. The next year, after we switched Internet Service Providers, we expanded out to our ISP so we could communicate with the rest of the world via IPv6.  Once we verified that everything was working on our critical servers and admin VLAN, we then moved on to internal servers and services people would access from off campus like our VPN servers.

In our server room infrastructure out to the Internet, we are set up and live with IPv6.  Our plan now is to expand out to our faculty, staff, and computer labs. When we were initially deciding to implement IPv6, our Server Manager, Jason Pergola, and myself talked to our CIO, Dan Faulk, about moving forward with acquiring an IPv6 range.  Because of the uncertainties with IPv6 and not many, if any, colleges in our area even thinking about IPv6 yet, our CIO asked that we first put together an initial plan.  After discussing our plan and the benefits, we were given the green light to move forward.  Laying out a road map is what helped to make a good convincing case.

We hit a few snags along the way, but for the most part everything seemed to run smoothly.  At first, we found all Windows systems would pull an IPv6 address via DHCPv6, but we could not get any Mac computers to pull one.  If we took the same Mac to our home ISP, it would work.  It turned out a colon in the wrong place caused a lot of confusion (think a link-local address format of FE80:7::1 instead of FE80::7:1 – a result of us trying to be fancy with manually configuring the link-local address instead of allowing IPv6 to automatically generate it). Once we figured it out and assigned the same link-local address to every VLAN interface with the FE80::#:# format, we were good to go.

As a smaller institution, we lucked out because we had just upgraded our firewall and Internet management appliance, and we just did an update on our core switch.  All of our backbone network equipment and server infrastructure supported IPv6. Everything fell into place. We currently have some parts of our campus that have older networking equipment that do not support IPv6, which we are in the process of phasing out.  With recent upgrades, we are now ready to continue the rollout.

Our Server Manager said he noticed a huge speed boost to our email servers once we opened IPv6 to the rest of the world.  At first with IPv4 only, there was a lag but once our servers were also communicating with the outside world via IPv6, those processes were not taking nearly as long.  It appeared that those servers were trying to use IPv6 first and when they could not, they would rollover to IPv4.  We have also noticed that some Internet activity seems to be responding quicker than it did over IPv4, like accessing certain websites or videos.  It could be the way different content loads, or it could be something with the way our ISP has their IPv6 network infrastructure set up.

From a recruiting standpoint, if you have potential students who are researching your college and they are not able to connect to you because they are running IPv6-only, then I feel like you are hurting the institution.  Or if there are students currently enrolled that are looking to do research, and they can’t connect to the proper resources, that isn’t allowing students to complete their classes and get good grades.

IPv6 is not as scary as many people are making it out to be.  Like anything else in the IT industry, you have to put in the time to actually learn IPv6. By not doing it, you are limiting your institution by not being able to communicate with everything in the world.

Do proper research and planning. Even to this day, we are still learning.  Do not be afraid to ask questions. No matter how bizarre the issue is, you never know who will give you the right answer that may lead somewhere else.  Or you may be helping out someone else without even knowing it.