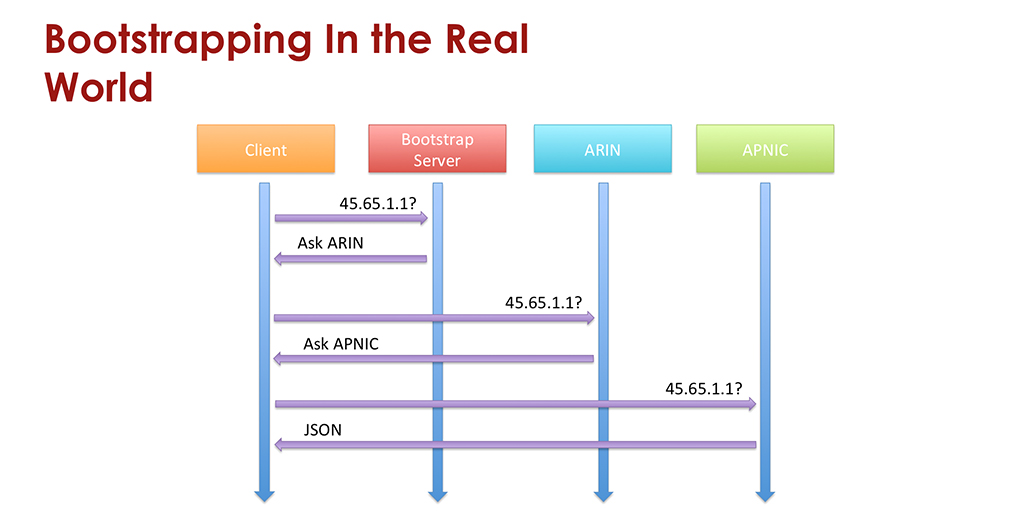 How I Learned to Stop Worrying and Love the New Whois: RDAP

In the summer of 2015, you may have heard about a new service ARIN was rolling out called the Registration Data Access Protocol, or RDAP. Perhaps you understood that it was intended to be a successor to the Whois protocol, but you weren’t clear on the specifics. Maybe you weren’t even aware of the need for a replacement. And come on, what really makes RDAP better than Whois? The answer is a lot and if you’re not using it by now, you should be.

Let’s start with some background: for many years, Whois was the gold standard when it came to querying resource registration data from the Regional Internet Registries (RIRs) and Domain Name Registries (DNRs). However, Whois was not without its limitations, the first being that Whois is a text-based protocol. In layman’s terms, this means that it’s difficult for computers to interpret the meaning of the results. Second, Whois utilizes a specialized protocol and port, meaning that numerous firewalls could block it, rendering it unusable in many places. Lastly, its response data objects may not be translated into languages other than English, which is a hindrance for obvious reasons. Whois also doesn’t define queries or responses, so interaction with different DNRs and RIRs can vary significantly and in unique ways.

To address these increasingly problematic issues, RDAP was developed. Like Whois, RDAP is a directory service for Internet number resources, but it offers numerous advantages over the aging Whois protocol.

To begin with, RDAP uses Representational State Transfer (RESTful) web technologies to make access to registration data as robust as possible. These are the same set of technologies used by modern Internet services such as Twitter, Facebook, Google, Amazon, and more. Additionally, RDAP’s response data objects are easily translated into languages other than English, and it can offer direct referrals to other RIRs when necessary.

Should you wish to operate your own bootstrap server, ARIN’s is open source and available via GitHub. ARIN has also developed NicInfo, a smart, command-line RDAP client. NicInfo will attempt to determine the most appropriate RDAP server to query and follow redirects to other RDAP servers as needed.

If all of this isn’t enough to convince you to start using RDAP, keep in mind that RDAP has a very bright future ahead. Some promising trends include all five RIRs having an RDAP server now, several DNRs beginning to deploy it (such as Nic.BR and CNNIC), VeriSign prototyping tiered access to Whois data via RDAP, and finally, ARIN looking into putting Routing Policy Specification Language into RDAP.

By now it should be plain to see that RDAP holds plenty of advantages over Whois, both currently and in the future. So are you ready to start using RDAP? There are a couple ways to get started:

If you need help, the RDAP page on the ARIN website provides more information on how to correctly configure your searches. You can also view related RFCs.