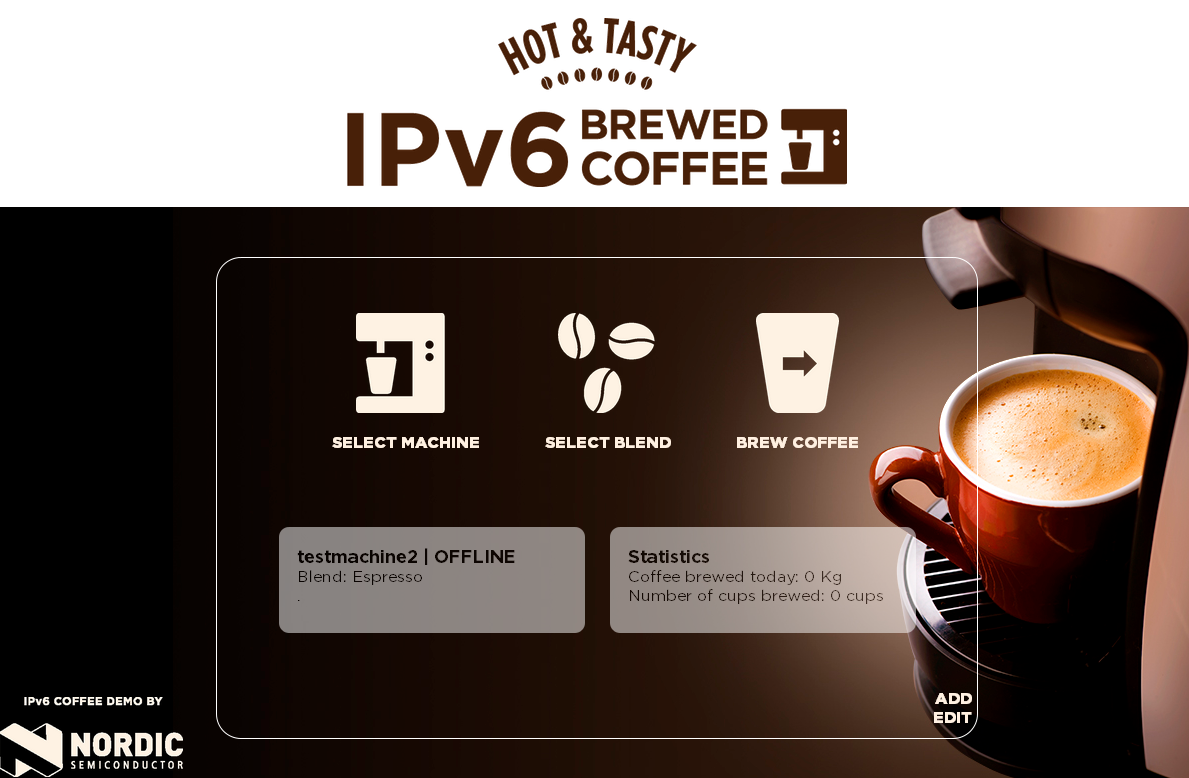 Glenn Ruben Bakke explains how Nordic Semiconductor is connecting to the Internet of Things using IPv6 over Bluetooth Smart in everything from keyboards to coffee makers.

Believe it or not, the day has come when your coffee machine could know what exactly what kind of coffee you like to drink depending on the cup you’re using, the time of day, and a multitude of other factors. Earlier this year, the Nordic Semiconductor team demonstrated a smart coffee machine at CES that brewed coffee over IPv6. But coffee machines aren’t the only place where innovation is possible. As a leader in Bluetooth Smart solutions you will find our chips in products all around your home from wireless keyboards and mouse, TV remote controls all the way through to wirelessly controlled toys. Basically, we are already in a wide range of diverse devices. So, for us, extending those devices connectivity through the internet was the next logical step.

We are a strong advocate and believer that the right long term approach for connecting everything to the Internet is by using open standards. In this way obstructive barriers to cross-platform, device and OS communications will be dissolved.

Recently a lot of effort has been made by the Internet Engineering Task Force (IETF) to make the Internet suitable for smaller devices, something that is referred to as 6LoWPAN. Bluetooth Smart Specific adaptations and recommendations for 6LoWPAN are being defined as BLE 6LoWPAN and can be found here.

BLE 6LoWPAN enables compression of IPv6 traffic and optimizations in procedures (for example, neighbor discovery) on Bluetooth Smart. BLE 6LoWPAN defines Stateless Address Autoconfiguration (SLAAC) of IPv6 addresses using the Bluetooth Smart Device Addresses. The 6LoWPAN-enabled Bluetooth Smart device will derive a EUI-64 address based on its own EUI-48 MAC address and this is combined with the assigned prefix to form an IPv6 address.

We wanted to demonstrate the exciting possibilities that this technology enables and we wanted to show that by doing something practical. What better way than brewing coffee over IPv6? – not only demonstrating a connected appliance that can be controlled and monitored from the Internet, but also getting a nice cup of coffee at the end of it.

The coffee machine, being IP enabled, has its own IPv6 address which means it is directly addressable from the Internet. Also, native support IP protocols allow the coffee machine and the cloud application to use the same protocol without any need of proxy or translations. The application protocol used in this demo is MQTT, a TCP based protocol.

In this demo you can request a brew through the web interface. You can also see if the coffee machine is brewing or idle, the number of cups brewed etc. - all examples of monitoring a remote appliance.

We used the following hardware components to brew coffee over IPv6:

The software pieces we used are:

The radvd is setup to delegate an IPv6 prefix to all the endpoints connecting to the switch so that global IPv6 address can be created on the nodes using State-Less Address Auto-Configuration (SLAAC). The Ethernet interface (eth0) takes care of devices connecting to the simulated global network, and the Bluetooth interface (bt0) takes care of the IPv6/6LoWPAN over Bluetooth Smart devices connection. For Bluetooth, radvd will give each node on the link (bt0) a 2001:def:: prefix, and for Ethernet each node will get a 2003:abc:: prefix using 2003:abc::1 as gateway.

With this setup each coffee machine can create a TCP connection to the MQTT broker using its global IPv6 address, publish messages and listen to responses or commands.

We were proud to demo our IPv6 coffee machine at CES earlier this year and see it as the first - and major - step of many devices into IoT over IPv6.

Glenn Ruben Bakke is a Software Engineer who has been developing software for Nordic Semiconductor’s nRF51 Series ICs as well as working on the development of the IoT SDK.